Poaching – we all hear about it on the news and most of us know about the devastating effects it is having on endangered wildlife populations.  But exactly how bad is the situation and what is being done to stop this terrible wildlife crime?

Africa is famous for its extraordinary wildlife and the ‘Big Five’; Elephant, Rhino, Leopard, Buffalo and Rhino. Four of these species face the risk of extinction.  The majestic African Elephant is currently listed as Vulnerable and the Black Rhino is classified as critically endangered by the IUCN.

The illegal trafficking of wildlife is now ranked as the third largest criminal industry in the world and poaching has once again sky rocketed in recent years due to the ever-increasing demand for the ivory, bone and fur of exotic species.

Africa is also home to some of the world’s most unique great apes including; chimpanzee, bonobo, the western gorilla and the eastern Gorilla. All four of these species are endangered. Hunting for bushmeat and the illegal pet trade are two of the greatest threats they face. Domestic meat prices are often prohibitively high for people in local communities, meaning that wild animals have become an important source of cheap protein.

How does the Conservation Community combat poaching?

Healthy Planet works in partnership with numerous charitys dedicated to the protection of wildlife around the globe. One such charity is Care for the Wild International.

The Conservation Community provides Care for the Wild with a platform to raise funds for the crucial conservation work they are doing in Kenya. With such resources the team is able to hire additional wildlife rangers and purchase better equipment, enabling them to combat poaching on the ground.

If you want to learn more about the Conservation Community click here to visit our preview site that will be launching this summer.

The Tsavo ecosystem is part of the largest protected area in Kenya and is also home to one of the biggest elephant populations in Africa. Tragically this vast abundance of wildlife is seriously threatened by poaching activities and many populations have been forced into decline.  Elephant poaching is once again rising in Central Africa and earlier in 2013 an entire elephant family was wiped out by poachers in Kenya.

Care for the Wild work together with the Kenya Wildlife Service to carry out vital anti-poaching patrols within Tsavo East National Park. Various activities are carried out during such patrols in order to prevent poaching and the devastating impact it is having on wildlife populations. These include: the removal of wire snares set to trap animals for bush meat; rescuing and rehabilitating injured wildlife, and raising awareness about wildlife conservation.

Poachers can construct snares out of almost any wire they come across. These traps were once used primarily to catch bush meat for subsistence reasons however this is no longer the case. Nowadays bushmeat fetches high prices in African city markets and has even been able to make its way overseas. 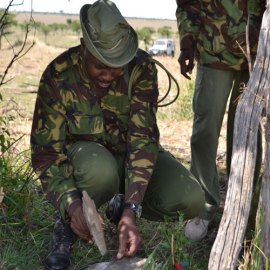 Snares inflict awful injuries to the animals caught in them and often result in an excruciating drawn out death.  Although poachers may be targeting certain species, snares are responsible for the deaths and injuries of many non-target species, including lions, leopards and even elephants.

Care for the Wild’s anti-poaching teams work tirelessly to find, remove and destroy these deadly snares laid by bushmeat poachers.

With technology constantly advancing, scientists have been able to create new and innovative techniques to prevent poaching.  One such example is the use of Unmanned Aerial Vehicles (UVA’s) such as those used by the International Anti-Poaching Foundation (IAPF) Drone Program. UVA’s are remotely operated light air vehicles that can fly autonomously as part of a pre-arranged flight plan. This enables organisations such as the IAPF to monitor larger areas of land whilst reducing their own exposure to armed and potentially dangerous poachers.

Click here to watch a recent Ted Talk on poaching by Damien Mander, the founder of the IAPF.

Another very recent development is the use of toxic chemicals to spoil rhino horn. With 203 rhinos having been killed so far in 2013, a game reserve in South Africa has decided to take the radical step of poisoning rhino horns in order to prevent people from consuming them. Although such chemicals do not cause death when consumed, they would make a human “seriously ill”.  The hope is that word will spread of the dangers associated with taking rhino horn until it becomes a valueless product without demand.

How can you help?

Ultimately the issue of poaching is one that goes much deeper than the battles taking place on the ground. Every individual can make a difference by discussing the issue, raising its profile and learning more about the conservation work of partners  such as Care for the Wild. Show your support by getting on the map this summer and  together we can win the battle against poaching!

Everyone can make a difference locally & globally to the health of the planet and its people. Be part of it! U.K charity 1122475
View all posts by Healthy Planet →

One thought on “The fight against wildlife poaching in Africa”

Trying to live a creative life