South Georgia is a unique and beautiful place. Along with having a rich human heritage, it is also home to a wide range of marine and terrestrial wildlife from elephant seals to King Penguins! The island is particularly famous for its seabirds and is considered as one of the most important seabird islands in the world. Tragically many of the species which live there face the risk of extinction.

The main reason for this has been the introduction of Norwegian Brown rats as a result of sealing and whaling activities in the area. Although such practices have been stopped, the island is still suffering from the devastation caused by these destructive little creatures.  The rats developed a taste for the chicks and eggs of ground-nesting bird species such as the Storm Petrel, Prions and Blue Petrels. As a result, many of these lovely birds have fled the island leaving it bare. 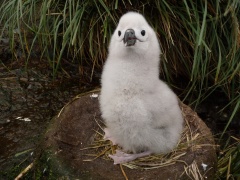 On top of all this, climate change is making things worse. Global warming is causing South Georgia’s glaciers to melt at a rapid rate.  Such glaciers have been acting as barriers, protecting certain areas from this invasion of the rats. If these remaining barriers disappear, the few surviving bird populations are likely to flow suit.

Healthy Planet’s conservation partners, South Georgian Heritage Trust (SGHT) have been working hard to protect the current wildlife on the island and prevent any further damage. In order to achieve this, the trust has embarked on the largest habitat restoration project ever attempted. The aim of this ground-breaking project is to save the island’s native birds from extinction by eradicating all introduced rodents from South Georgia by 2015. This is a mammoth task and the first phase alone approximately cost a whopping £7million in total! With the support of Healthy Planet, the SGHT has managed to complete the fundraising for Phase 1 (clearance of rodents from trial areas around King Edward Point and Grytviken) is complete!

Looking to the future…

The SGHT now urgently needs help to raise the funds for Phase 2 of the project – eradicating rodents form the remainder of South Georgia. This will cost another £5.5 million.

Healthy Planet has recently received a Project update from, Tony Martin, the Project Director, in which he beautifully depicted the splendor of South Georgia as well as the trials and tribulations they face in such a challenging environment.

In February 2013 ‘Team Rat’, as Tony describes them, embarked on the exciting journey known as Phase 2. Before first light people were up and about on deck and within the 24 hours the team had pulled enough supplies to clear rats from 77 square km of the island (25 tons of bait and 108 drums of fuel). After having unloaded the most precious cargo, the helicopters, Team Rat was ready to start the difficult task of depositing the supplies to 14 different sites around the island.

Despite severe weather conditions, including blizzards and gale force winds, the team have already successfully managed to set up bases around the south coast and western end of the island.  They are now coming to the end of this labour intensive process, with only a few days to go before they begin the all-important bating work.

‘Team Rat’ needs your support! By donating today you are can help the South Georgia Heritage Trust to preserve the island and its natural heritage.

For more information about the Habitat Restoration Project visit http://www.sght.org/