On Tuesday 27th November I attended my first event as part of the Healthy Planet team at the launch of the Conservation Community and the Get on the Map initiative, which attracted a full crowd of enthusiastic attendees to Google Campus London.

The Talks
The evening kicked off with an inspiring talk from Shaylesh Patel founder of Healthy Planet, with the hard-hitting line “for the first time since records began, our kids are on track to lead a shorter life than their parents’’ – what a way to engage an audience! Shaylesh passionately spoke about the greener and healthier choices that we, as individuals, can make to help create a better planet for future generations, and the wide variety of projects that Healthy Planet has initiated. Being a new intern at the organisation the success of the projects astounded me as much as the audience! The Books for Free initiative for example, has so far saved over 2 million books from being pulped or sent to landfill – that is a whole lot of books!

Next up on stage was Dr Mark Mulligan – lecturer at King’s College London and chair of the conservation advisory board for the Healthy Planet Foundation. Mark – clearly an avid conservationist – explained the core concepts behind the development of the Conservation Community which aims to combine knowledge, technology and people to actively get involved in conservation through the use of mapping and social networking. The online experience allows the user to choose projects to get involved in, create an online profile, interact with members and spread the word of conservation to the wider community. Amusingly the social media fanatics in the room all looked extremely excited at the prospect of creating a new online profile and being awarded with badges for frantically tweeting!

The final speaker of the evening was Ed Parsons – Google’s Geospatial Technologist – who ended the talks with a surge of optimism. He outlined the major impacts that technological advances have already had on increasing global communication and social interaction, and the positive knock on effects to global conservation. Ed continued to say that as technology continues to spread, we as individuals can build relationships with conservation projects that we care about, we can tackle local and global issues, and we can make a real impact on the natural world. 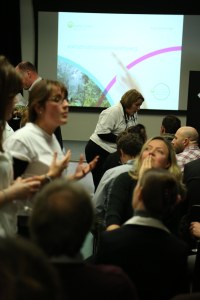 The clearly inspired audience were then given the opportunity to make their own individual conservation hopes and dreams heard. To start, everyone was assigned to a team which reflected a current Conservation Community project – I was team Tiger to reflect the Phoenix Fund mission to conserve the Amur Tigers in the Russia Far East.

After learning about the different approaches Healthy Planet are undertaking to increase the conservation of each species, everyone was asked to think of their own conservation wish and attach the wish to the Healthy Planet Map – note the name of the initiative Get on the Map! Reading some of these wishes was definitely the highlight of my evening, seeing everyone talk about their favourite animals and what they would like to see done to help conserve our world for centuries to come was inspiring! All these wishes are online on flickr for everyone to view.

My personal favourite wish has to be “that future generations will be able to enjoy immense biodiversity both overseas and in the UK”.

The Chat
The final part of the evening ‘networking’ was the part I was most dreading! Typically, when I’m nervous I stumble over my words and end up hiding in a corner, so the idea of approaching a complete stranger and plucking an intellectual conversation from thin air was terrifying! Fortunately for me however, whilst debating whether I was safer hiding in the ladies or under the stage, I was approached by a lovely young gentleman who too admitted to contemplating running to the foyer and texting his entire address book as a tempting solution to his nerves. Surprisingly I was much more at ease after this conversation – safety in numbers and all. Soon the buzz of the evening filled the air, the conversation (and wine) was easily flowing, ideas were bounding, and the growing interest in the Conservation Community was obvious. 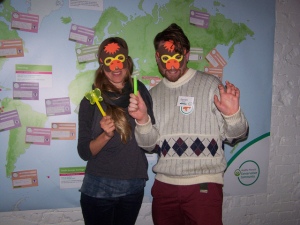 The Food
The final triumph of the evening was the excellently chosen vegan canapé selection which was provided by Vegan Peasant Catering. The food was delicious, and that is coming from someone who usually shrivels away from a humus pot and anything resembling a vegetable. I can proudly say I tried Tahini Ganoush and Sage Crisp & Candied Lemon Zest on Crostini. In addition for anyone reading this who wants to spark a conversation with a group of powerful looking women –  go armed with a tray of Pink Sea Salted Brownies, women are like putty in your hands. See all the photos from the event on Healthy Planet Flickr.

We are currently editing a short film by potentialproductions.org which will include excerpts from the event and mini interviews with the guests, watch this space.

Trying to live a creative life